I'm back with the second and final part of my set of Descent review articles. Before I get in I want to say that I made some updates to the first part, so re-reading it or at least skimming it for the changes will probably help you understand this one better.

I'm probably an outcast from the rest of the Descent players in the sense that Descent 3 is my favorite of the series. Most prefer the first or second, with the second I think being the most popular. I also like single player games better than multiplayer, which some of you may find really weird.

Anyway, this game uses the same concept from the previous games(that of a 360 degree spaceship shmup/puzzle game) and takes it all the way. The graphics technology available also did the concept way more justice, while still retaining  some fairly appealing visuals. Add in the fact that this game also ran on Linux, and you have something pretty awesome going on.

The storyline in Descent 3 takes a much bigger role in the experience this time, with numerous cutscenes and in game story details  via things like radio chatter as well as many more pieces being revealed during "ye olde" pre-mission briefings.

The story starts where the second game left off. The player is rescued by Red Acropolis, who explains that Dravis of PTMC(who I forgot to mention in the first part and had to go back and add) is responsible for the near death of the Material Defender. Katelyn Harper who works for Red Acropolis becomes the main informer and convinces the Material Defender to help Red Acropolis bring Dravis down. The plotline from then on is an intricate and involving one, which takes the cake pretty well. The ending is quite superb, probably ranking within my top five video game endings. 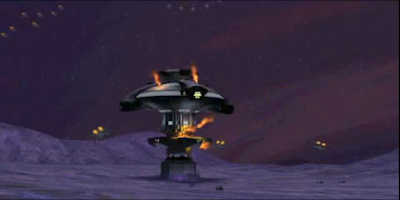 Levels are no longer simple get the keys blow the reactor and run levels. Every level leaves the player with totally different puzzles and goals which can be everything from protecting targets to rescuing prisoners to stealing parts for a new spaceship. The guide-bot stays on to help navigate the levels which are still fairly complex.

Probably the thing that got me the most about this game is the choice to include "jumping puzzles." I'm using a figure of speech I coined with some friends to reference any kind of puzzle which isn't one of thinking, but one of luck and often dexterity which must be attempted numerous times before even the most skilled players can succeed. Descent 3 has three such puzzles, which don't get in the way too much but can still be a nuisance.

There are twenty weapons, which work the same way as the weapons in the first games. The player can load one weapon from each type into each weapon bay and fire simultaneously if needed. Many weapons are carry-overs, redesigns, or simplifications of weapons in the originals, although there are some totally new ones as well.

There's a pretty good set of enemies which are pretty diverse and cool looking, and all the bosses are even more awesome. Some of the bosses err a bit too far on the "kills you again and again until you get lucky" side, but I didn't find them to be too much of a problem.

A lot of the sound effects are kind of hokey, but they work and are enjoyable to listen to. The music is pretty awesome in my opinion. It's a mix of electro, hard techno, rock, and more, although no genre dominates a single track even.


So anyway, I give Descent 3 a final score of 8.
Seriously.

I know you can't comprehend that I would give Descent 3 a designers score of eight when I enjoyed it more than the first game which I gave a nine to. It's because while from a "survive in the market and be designed well" point of view, Descent 3 is behind the first game regardless of it's better technology and my having enjoyed it more.

It's definitely a game I enjoyed, although the steep learning curve may turn a lot of people off as well as the slight annoyance a few of the puzzles pose. I recommend it to people who are willing to keep trying again when they hit a rough spot.