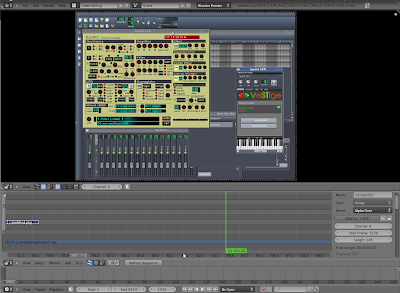 I was trying to add some overlays during certain parts of the video. That really should be no big deal, I mean there are tons video editors I've done this sort of thing with, and probably plenty editors that I haven't tried. You'd think I'd be able to add a couple overlays in no time at all.

That's what I thought, but I very quickly became aware of several little quirks and flaws in the system. Firstly, seeking is totally broken. I can play the movie and make note of what was going on during frame X, and then stop the movie. But then if I jump to frame X, it will sometimes be somewhere completely different. A certain frame very seldom remains the same when you jump to a different part or play the movie again. On top of that, it seems to randomly cut off the beginning and ending as well.

I learned that going back to frame 1 and pushing the "Refresh Sequencer" button will occasionally snap things back to normal, but it breaks again the moment you change from frame one regardless of how you do it. This is especially a problem when it comes to exporting the movie file, as this problem also happens when outputting frames to the file.

I spent quite awhile trying to get it to work properly, as my overlays stayed in their place. It was just that they started at frame X, and what was going on during frame X in the movie file I'd imported was never the same. I eventually gave up. I may never try Blender for video editing again. Then I guess I might come back later and give it another chance. But for the moment, I'm still using good, old, and a bit to minimal Pitivi which comes with Ubuntu.