Hazzah for being back in the business. Yea things are going pretty slow due to school, more of a fact of life than a variable. Anyway, I haven't got a whole lot to show, but I figure a little is better than none. 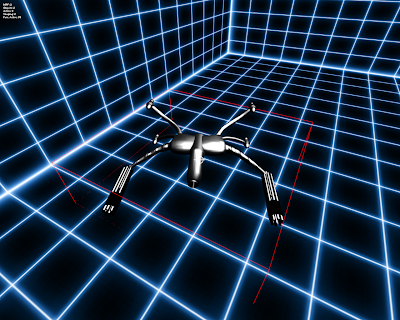 I finally got some rudimentary physics simulation coded in Ray3D, and I've been having a blast playing with it. I basically just set the boss to be a rigid body and turned on bounding box rendering(which you might not be able to see without clicking to zoom in). I've just been tweaking settings and experimenting with different gravity and collision methods.

One thing that's gotten left out of the story, is the part about the lasers. I just basically threw something together that will let you fire 30 times and then stop. The stopping is basically a safeguard that makes sure you don't run past the array length and crash the system(if you're lucky). I don't check for collisions to make the lasers die or anything. This is quite horrible for a number of reasons, and I've been putting it off because it kind of works. Let that be a lesson about throwing together temporary solutions.

I'm also adding more variables to the config file, making it less hard-coded. I'll probably eventually separate it out into several files for different categories making things more data driven, but I'm not there yet. I also discovered that preserved surface normals are not a given, which can lead to some really weird lighting situations. 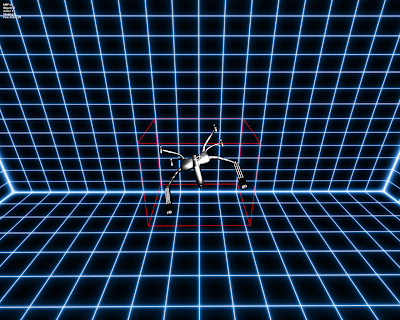 Other than all that, I've done little more than experiment with the size of the boss, knowing it will become an important factor in scale later on. The scaling apparently also has effects on surface normals, which in turn contributes to the lighting problems.

I guess that sets me up for about 3 hours of work on this project so far. The new time budget is 500 hours, which is because I'm aiming for something fairly ambitious. I know it's probably another project that's doomed to failure, but aren't those ones the most fun?

--LazerBlade
Posted by Unknown at 9:11 PM