There are a few games that I'm known to be a big fan of, some of which shape my tastes and my personality. The Descent series makes up three of those games. 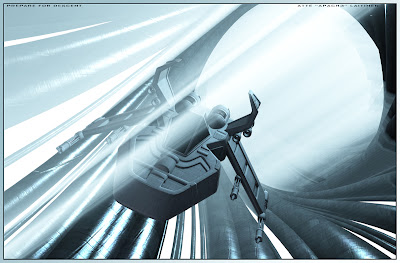 I'm going to review all three of them in one article set, so buckle up and prepare for a possibly bumpy ride. Scratch that, get something with caffeine in it instead, it's much better for reading my game reviews.


The first Descent game, merely titled "Descent," came out in 1995, just two years after the world changing DOOM game. By the date, it's easy to guess correctly that Descent was a DOS game. It's not easy to guess that the graphics were quite a ways ahead of what was normally on the market at the time. Descent threw away all conventional gameplay and control schemes to come up with a 6 degrees of freedom game in which the player was allowed to move or turn in any direction without gravity bias.

Note that even thought Descent was originally a DOS game, there are modernized open-source ports of the game to newer operating systems which enhance the graphics as well as fix bugs. I'll be using screenshots from either the original or a port that replicates the old graphics though.

The plot places unnamed material defender #1032 in the cockpit of the Pyro-GX(which to this day is my favorite one-manned space fighter.) It seems that quite a few of the PTMC(Post Terran Mineral Corporation) mines spread throughout the universe are being plagued by an extremely complex nano-virus which is causing the robots to rebel.

The player is tasked by Dravis of PTMC with going through and manually destroying each mine by causing the nuclear reactor to self destruct, and then high tailing it out before it does(this can result in some really cool exit cutscenes esp if you have the moviepack for Descent 2). The player is also advised to keep an eye out for any hostages the robots have taken and rescue them as well.

Yea, it's a pretty simple storyline, and in a very arcade style by nature. What else can you expect from a 1995 DOS game though? There are also briefings before each level with tips and sometimes hints about the story.

The game has you ten weapons, five primary and five secondary. The player can naturally have one weapon of each class selected at a time, and fire both at the same time if they want to. Primary weapons all draw from the energy pool, except for the Vulcan Canon which has it's own ammo. Secondary weapons also have their own individual ammo banks as well. Nothing extremely complicated.

There's a fairly wide set of enemies the player may encounter, and some boss fights mixed in as well. Some of the enemies are even revealed during pre-level briefings before the player encounters them.

The sound effects do sound good even though they aren't necessarily the most "realistic." The music is also quite appealing if you aren't afraid of old school midi.

The game is from back when you had these things called difficulty levels. That's where you can set the game to be easier or harder in order to expand the range of skill-levels the game targets. It also makes things like learning controls easier for some people. The difficulty levels range from "don't spend more than 20 minutes in front of the boss or you might lose a little bit of health" to "the weakest enemy will kill you in under five seconds unless you're really talented." Hotshot is the medium difficulty if you're wondering.

As far as level design goes, the game is extremely linear. It's merely a search for the blue, yellow, and then red keys in that order, then a search for the reactor, and a run for the exit. The rest is basically just pure destructive fun. There are a few tactical details the player should be aware of, including energy recharging tunnels which have yellow stars floating in them, purple temporary cloaking devices, blue invulnerability orbs, and purple robot building tunnels, lava which will burn anything that touches it and cause explosions when shot.

All in all Descent is a pretty good game, and I recommend it. I'm not going to write a whole article on Descent 2 since I would be repeating a lot of what I said here, but I do have some information. Descent 2 came out in 1996, using a very similar engine but with more features and slightly higher graphics capabilities. There are twice as many weapons, a lot of which are improved versions of the Descent weapons. There are also more enemies and there are more bosses are spread around even though are are less levels.

Story-wise, Material defender 1032 is forced by contract fine print to further help PTMC by purging the deep space mines, an obvious excuse for more levels. BUT, the storyline picks up and takes a few turns at the end of the game which paves the way for Descent 3.

The levels become markedly more complex, which brings the GuideBot into the series to help the player find their way. Although there are many much more complex puzzles, the levels can still be leveled down to the same old arcade style of the first Descent game. To be honest, I'm one of the few Descent players that didn't really get into Descent 2, preferring the first and third games. I did play through the second one however, and I enjoyed it.


And the finals scores:

Descent 1 doesn't really fail anywhere, it's just a really hard idea to make a 10 point game based on the premise. Descent 2 does fail in some places for me, mostly in level and puzzle design, but it makes up for it with nicer graphics and a good story. I recommend both games to anyone who like fast paced action mixed in with puzzle solving and a sweet arcade feeling. It's also a good burst of nostalgia for those of you that were around when it came out.

Stay tuned for the next part when I'll be reviewing Descent 3.