The art of the vacuum 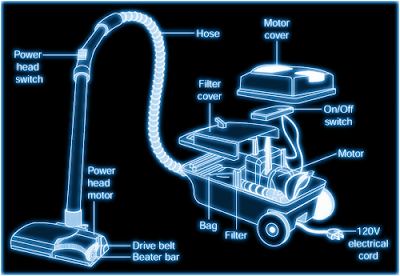 "What is this obviously Gimped(like the image editor) picture doing on my screen?" "That's the memory mnemonic that helps you remember and helps me prove my point." "I don't like it." "Yes, but you will remember that you didn't like it, and that will help you remember the rest of the post." "Or it will help me remember me tying your arms in a square knot."

You might be wondering, what place does a vacuum cleaner have in the lair of a techno-geek? We don't spill food, and when we do we always have our minions lick it up off the titanium floor one crumb at a time. Yet why do we still find them in almost every lair? Why should the modern techno-geek of today consider having one?

The answer is simple, computers NEED vacuumed. Seriously, if you want to keep your machine around, you should vacuum it regularly. It will vary for different machines and different climates, but I find once a month is usually pretty safe. Vacuuming is something that can only be trusted to the highest minions, and sometimes can only be done by the geek itself.

You may not believe me, or you may think you haven't the time. I was once of a similar mindset, and have recently come to greatly appreciate my decision to vacuum regularly. Why this recent burst of pride and appreciation?

You guessed it, another tech support trap. Well, this time it wasn't really a trap, more of a likes to have friends and money(or money anyway,) so it was only a small step away.

So anyway, I get a call from one of my non-geek connections saying they have malware. Yea that figures, non-geek kinda goes with that. I accept the job, and have them drop off the computer. I didn't have time to look at it right away, so I just stuck it in my task stack near the top.

It ended up sitting in my lair for almost a week before I got to it. Yea, the thing was filled with malware, running slower than a snail carrying an anvil, and seemed to be lower on RAM than it should have been. So I do a little bit of malware hunting, which is really hard since the thing is apparently part of some kind of botnet based on how it prevents you from using it while still using up so many resources.

I decide to open it up and vacuum it out, knowing non-geeks don't do that very often. I also had to put the drive in a different machine and run anti-malware scans from an external system. So I pop the thing open. What I saw made me sorry I hadn't bought that digital camera I had my eye one. The thing was basically a huge roach nest. This was annoying on a number of levels. For example, that machine had just sat in my lair(which now has roaches) for almost a week.

Anyway, it took me two hours to get the mess cleaned up. They'll probably be finding stuff left over from that incident jammed into tiny little crevices I couldn't vacuum or didn't think to. Even after that, I found that there was a thick layer of dirt encrusted on top of the CPU's heatsink which was behind a permanently attached fan. If you turn the machine off and open it up, you can feel the heat by holding your hand a few inches away, and you will burn yourself if you touch. That didn't come off easy either.

Yet all of this could have been avoided if they had simply taken it upon themselves to vacuum their machine out every once in awhile. Even non-geeks, it's very simple. Just open the case and clean out any dust(or bugs) you see.

So if you haven't opened your case in awhile, you might consider checking for bug infestations and cleaning the dust out.

Oh, and for those of you who haven't witnessed me ranting previously, you just did.