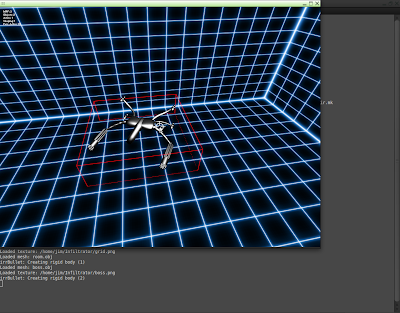 Some developments, but no huge improvement this time around. You can probably tell from the screenshot that I have it running on Linux Mint. It's actually a bit of a pain to develop, since I keep the source code on an NTFS partition on my Terabyte drive and Linux won't let me execute the files. I have to copy/paste the executable from my Terabyte drive to my internal drive every time I make a small change.

I guess I'll be developing it on Windoze, but I can port to Linux in the snap of a finger once it's done. This is because I don't use platform dependent code. What kind of knucklehead does anyway? Oh yeah...

So on top of figuring out how I'm going to do cross-platforming, I also put a lot of the plans I made previously into effect. For example, a lot of values like how fast the player and lasers move, and other game data like that is now loaded from config files instead of being hard-coded.

I also fixed up that nasty object structure, it now makes a lot more sense. I'm glad I made those changes while there's still a fairly small amount of code to move around. It would have been a nightmare to do that after I'd been coding for awhile longer. I still need to add some kind of enemy base-object, but now I have a solid base to build that object on.

This session took two hours again, mostly because I had stupid IrrBullet linking errors to fix, but I was ready for 'em. Seven hours down, I don't seem to be having time budget problems just yet. Stay tuned next time where I will hopefully stop clowning around and get down to setting up some enemy objects.