Yes this project is all but dead. I don't have screenshots for you, but it's still not dead. And the reason there are no screenshots is because most of the changes are internal.

Firstly, and of course, most importantly, I've improved the laser system. You can add collision objects which will kill the lasers on impact. The new system searches the set for an open data slot and sticks the new laser in it. This way, you can fire an infinite number of lasers but only have up to 30 on the screen at a time. 30 being the number of data slots for lasers.

I do have a problem though. My objects don't exactly interact with each other the way I want them to. They just float around bumping into themselves. Here, let me draw you an example of what it's like: 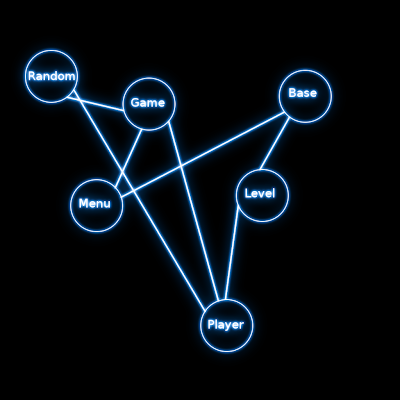 See what I mean? They don't communicate with each other properly at all. I have far too many global variables, mostly due to this same problem. I want things to be more orderly and actually work together in a way that makes sense. I end up with a mess that will cause even more trouble than it's causing now. I want something more like this: 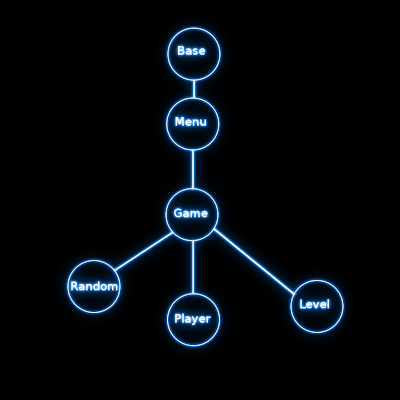 It's not all bad though. I did fix some of that. For example, there's no longer a global config object. Something more important I think, and probably almost necessary for this anyway, is to setup enemy objects. This poses quite a few design questions.

Most of them are asking how I intend to do this. Do I have a base enemy object that specific types derive from, or do I have a single enemy object that can be different kinds of enemies? Will the enemy objects belong to the level or will they be independent, just as part of the game like the player? Now we can see that this may get involved.

Anyway, I haven't put either of these plans into action yet. Those are just the plans. The action will probably be in the next session. I've only spent about five hours now, which isn't too shabby for how far I've progressed up to this point. That's only a hundredth of my total budget. Don't worry though, once I get going I'm sure I'll have no problem eating my whole budget out from under myself.