Work in progress: a tribute to One Must fall: 2097

We all know I'm a big fan of the DOS oldie, OMF: 2097. I really liked this game, hated the sequel, wish there was a new one somewhere, etc. I've been interested in recreating parts of it for the longest time. I even recently finished a remix of the theme music, planned to show up on my next album. Heck, I even made a fake trailer for a re-make back before I knew much about animation.(Yea, you're not going to see it. I've embarrassed myself with it enough times already. ;)

Anyway, let me dash you hopes early and say I'm not planing on remaking the game. Now, exactly what am I planning then? A short(around 5 minutes) 3D movie attempting to capture the feel and awesomeness of the game. To show you I mean business, here's a render of one scene I'm working on: 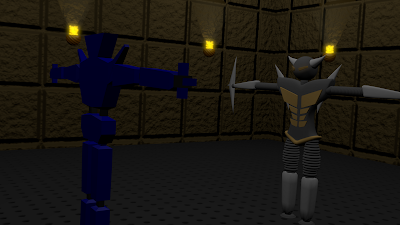 You'll note the bots are in the standard t pose. This is because I haven't started animation yet. They are however, fully rigged and ready models. I'll be honest, I've had the jaguar model sitting around since the first teaser. The Katana is the only new robot on the table. You can probably tell that I'm not going for an uber-realistic or high detail short by any stretch of the imagination. The simple torches demonstrate this. I'm just trying to make it look good and capture the feeling.

In the light of story, I haven't quite decided if I'm going to include much of one yet. I'm pondering my options, but mostly I'm just cranking out art assets at the moment.

Finish this or not, it will look really cool in my demo reel.