And so the legacy of Infiltrator continues. It's either quite resilient, or it's vaporware. Let's hope for the first.

Anyway, the new design calls for something much simpler. It's merely an overhead 2D shoot-em-up scroller. This is good because I can recycle my old SDL based RayEngine from about a year ago when I was working on gamma prime. I even coded 3D starfield and particle system support, as well as a few other handy things. I'm sure you're all dying to see a screenshot of this new game. Your hopes shall not be dashed this time:
(Do yourself a favor and click it for full-size) 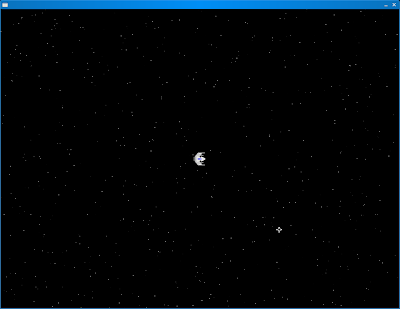 Your ship remains stationary in the center of the screen, but everything around it moves in the opposite direction of the ship. This creates the illusion that your ship itself is moving. It's pretty easy, because the player ship stores velocity in public variables. This way any other objects can be updated with these as parameters. I just invert the velocity and assign it to the starfield, and everything falls neatly into place.

I know this is moving abnormally slow for something so simple, but I have so little time to work on it that I'm lucky to be going as fast as I am.

Anyway, it's no huge step but it's a start. I feel like I'm charging for failure at a very expeditious rate...

But I'm sure as hack gonna have fun on the way there!