Have you ever started a project, and eventually came to the point that the project was just going nowhere? This has happened to me dozens of times. Sometimes, the problem is that you picked a project beyond your reach. Sometimes your schedule didn't agree with your project on terms of who gets your time. And sometimes your project slows down for reasons you can never find out.

In the case of Infiltrator, it's a combination of things. The reason that seems to plague me the most, is one I have chosen to express graphically: 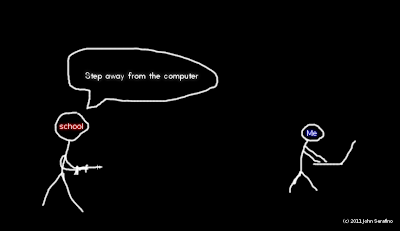 This odd little thing called school gets in the way of many many new game builders. There's really not much you can do about this, other than do your best to finish early and squeeze what little work you can in your schedule where it fits.

There are too many problems which are possible to have for one to even try listing or going over them all, so I won't waste your time with them. My biggest problem at the moment is actually a programming roadblock rather than some other problem. If you aren't a programmer, don't feel bad about not understanding the next bit of text.

The current goal I have is to integrate Bullet physics into Ray3D and use it in Infiltrator. I'm having a hard time getting things to compile. I basically recompiled Bullet and the IrrBullet myself and then proceeded to try to link it with my project. Suffice it to say I've spent more than a week trying to make it compile. I'm getting an assortment of linker errors saying it can't find things it should be finding either in the standard library or in the Dynamic libs which I have made sure I'm linking properly.

At any rate, Infiltrator is progressing a little slower than a broken legged snail trying to carry an anvil on it's left antennae. C'est la vie I guess. Whatever the case, I'm still working on it, and will post when I have more progress to report.