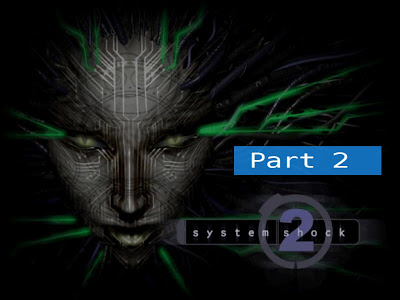 As promised, I'm back with part 2 of my System Shock 2 Review. Last time I talked about weapons, research, items, RPG elements, graphics, and control schemes. This time lets kick off by saying a few words about the storyline.
I lied, I'm going to say quite a lot of words about this games story. SS2's story is one of love, space, beauty, betrayal, hackers, corruption, cyberspace, science, loneliness, escape, and tragedy. Literally. The most important parts of the story are revealed via cutscenes and emails which play in your head once you receive them. You can always replay and reread e-mails if you forget, thanks to your cybernettic implants.

PDA's scattered throughout the game contain many audio logs which reveal more information about the story and often other useful information. Keep in mind, this game came six years before DOOM 3. A lot of the things in DOOM 3 may have been influenced by this game, just don't feel like it's a lame ripoff, okay?

The story starts off simple enough. Nothing is spelled out for you at first. SS2 begins a few decades after the first game, with the Von Braun leaving earth to explore deep space and the Rickenbacker coming along to provide support in the event of a battle. One of the passengers on this ship is none other than the same hacker from the first SS game.

Something goes horribly wrong however, and the player awakes out of cryogenic sleep to a ship which has been turned upside down. (In some places, literally) The rest is a mystery which is slowly revealed as it continues to develop. As much as I'd like to, I'm not going into much detail to prevent spoilers. But the storyline of this game is a complex beast full of twists, turns and surprises which will keep you on the edge of your chair until the very end.

But enough about the story, lets talk about the atmosphere and levels. The levels in this game were probably designed very carefully. There were very few places that made you think things like "What is this easy chair doing in the walk in freezer?" which seem to be more rampant in other games. Some people found this game scary, but I only found it really scary in a few places. The lighting is always perfect for the mood while never obstructing the gameplay.

SS2 is one of the few games to provide a good balance between rewarding explorers and making the game take too long if you expect to win. You don't have to go over everything with an electron microscope, but you can still check behind that extra door for a handy icepick which will make a hacking job easier in the future.

The atmosphere is mysterious, forbidding, and very uneasy. Enemies respawn in places from time to time, so you can never feel completely safe. Well actually, there are a few places in the game that are safe. Even if you realize you are safe there however, you just feel like a rat trapped in a box.

The cyberspace visuals are fairly good until the last level of the game, where they are just awesome.

The gameworld in SS2 is, like the first game, persistent. This means the game isn't just a dull trek through levels all of which are just going from entrance A to exit B. You will constantly be travelling all throughout the entire gameworld fulfilling different tasks and solving puzzles. It's even to the point where you can drop that extra medkit you don't have room for on the Engineering deck, come back for it later from MedSci, and it will still be there rather than mystically disappearing.

The sound effects are okay, and the music is probably the best video game music I've heard yet. It changes to match the situation, but it doesn't tell you when you are and aren't about to have enemies jump out from behind a corner and kill you.

The mini-games are something I can't claim to be an expert on. Or, at least the ones you have to use a game machine and cartridge for. But the other minigame, I know. Basically, in order to hack something, repair something, modify a weapon, or whatever, you get this nifty circuit minigame.

Yea, it's basically just mixing the mini-games from the first game together and dumbing them down a little into one game that applies to everything. In the first SS, you had to master several minigames each of which were useful for different things.

Yes, one thing I didn't like about SS2 was weapons breaking down. Over time, all weapons eventually wear out and must be repaired. This also requires you to play the minigame. But, you have some chance of destroying the weapon so that it can never be used again. You could just save before you try to repair a gun, but that is still nothing but a roadblock to enjoying the game. And yes, you can buy and hunt down repair tools which are good for one use and repair a weapon without fail, but I mostly found this a nuisance.

So, all of these things come together to give you the final presentation. Lovable asthetics, convincing and unpredictable story, fast paced action, clever puzzles, strong acting, persistent world, well expressed  atmosphere, and awesome music all make this game stand out to me.

I know what you have been thinking the entire time you've been reading this review. I didn't bring up that "choice" buzzword we've been hearing about so much in the industry. You actually have no choice whatsoever in how to plot unfolds or which side your character takes in this game. True, I like videogame choice, but this game is living proof to me that choice is not a necessary ingredient for a good game.


The only things holding the game from a perfect 10 are the weapon breakdowns, and the fact that technology that could do the game justice didn't exist yet.

Now, this is my favorite game. This is also the game I have given the highest rating to. You will find that there are various other people that loved this game. And yet, I don't think we'll see another title in the series. Don't get me wrong, I would LOVE a SystemShock 3, or a remake with modern tech, but I don't think we'll get one. Firstly, everybody has already decided that SS is a done deal which has been replaced by things like BioShock or Deus Ex. Second, SS2 didn't get that many sales. Third, looking glass died and has only recently come back to life, although their state is dubious.

I'd even remake the game myself, but I think there would be major IP problems there. And no, I'm not planning on it, and I have other projects going on right now anyway.  ;P

So, SystemShock 2 is a great game, I recommend you play it(provided you don't disapprove of it) and enjoy it. But please, don't hate it for it's graphics or it's being to much like DOOM 3.

--LazerBlade
Posted by Unknown at 7:09 PM