Do you think this blog is becoming an Infiltrator dev journal with random game design articles and music updates popping up every once in awhile? Then congratulations, you passed the being observative test! Now shut up and read this Infiltrator dev update because I'm already spreading myself thinner than the peanut butter on your sandwich when your little sister Julibop who prefers Jam makes it for you just to get the giant stack of ridonkulous things I do done.

I went overboard with the work I was doing on the warrior and went ahead to do this: 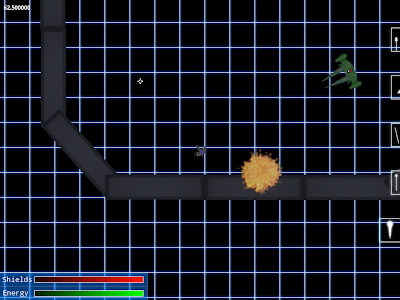 I dusted off my Blender skills to create a fairly high quality explosion animation for the warrior's rockets. They do heavy damage and also have a blast radius to mix up the gameplay by sometimes forcing you away from the walls of the level. Of course, I'm not 100% satisfied with the artwork on the warrior or the special FX and artwork of the rockets, but those are not the priority right now. Gameplay mechanics now, improvements of the visuals and sound FX later.

With the warrior completed, I moved on to the level editor which I am still improving. 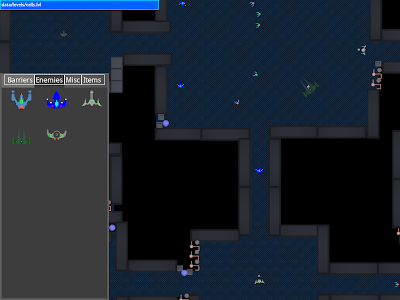 The need for a zooming in/out feature in the level editor was really getting on my nerves, so I added one. You can also now reset the rotation at which you will be placing objects by hitting the 'R' key. Also, to facilitate further updates to the graphics and scale of enemies, I have setup the enemy menu to scale all enemies up/down to the same size while keeping ratio in the menu. While you are placing them, they still appear at proper size under your cursor. The level editor still needs a lot of features before it's ready, but I am definitely making headway. Of note, I need to choose a GUI toolkit, write one myself, decide to use really simple GUI's, or just keep painstakingly programming all of the logic for every menu and every GUI element in the entire game and editor. This very important for the level editor, which will probably eventually require quite a complex interface that allows access and control of all the level file features.

I'll probably add a few more features to the editor before I get bored of it and move on to start creating the Assault Master enemy.

--LazerBlade
Posted by Unknown at 3:29 PM