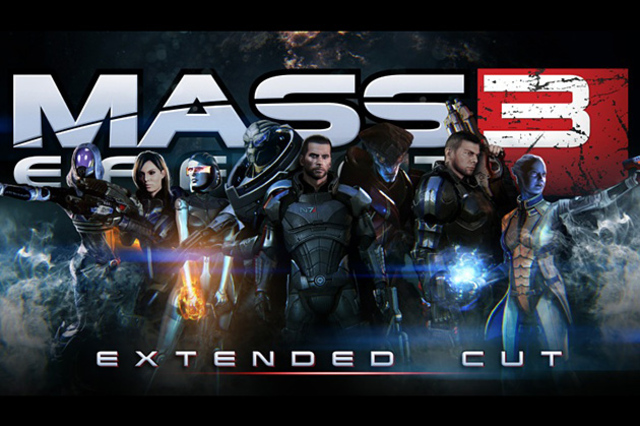 Awhile back when I did a from-the-hip-by-the-seat-of-my-pants review of Mass Effect 3, I spent an entire paragraph explaining how I wasn't going to talk about the ending. There is plenty of hate for it and some pretty awesome critiques of it that I can't touch. Then, along comes the extended cut. There is also a lot of good writing about the extended cut, but I have a few reasons to want to write about it myself. Before I get into those reasons(and before you hit the Read More button and blind yourself) I would like to warn you that the remainder of this post will obviously contain spoilers for the entire Mass Effect series and universe.

I want to preface this with my initial reaction. I intentionally went on G+ and posted my thoughts five minutes after the end credits so that I would have a clear picture of how bad any fridge logic was. Here is what I said:

"Let it be known that I currently think it's pretty good. There is a minimal amount of stupidity, and a lot of needed narrative closure. Good job BioWare, maybe you had to fix it in post, but you got it right."

But now... retract is such a strong word. Maybe just "clarify." Kind of like how the extended cut supposedly didn't change anything but just "clarified" things. You know, the one that means flat out changing stuff.

So for those of you who haven't guessed, my opinion changed once I started thinking about it. That leaves three reasons to write about this topic: 1) I want to amend the record about my opinion, 2) I can't reasonably fit this in another G+ post, and 3) I'm out of time to come up with something else to write. That in mind, let us end this unusually long introduction and talk specifics under the assumption that you played(or watched) the ME3 ending and extended cut. Buckle down, this is going to take a little while.

My first gripe is that the EC ending still doesn't fit into the rest of the story or universe. I don't think any Mass Effect game was ever written with an ending like this in mind. I could have rolled with this if it were brought up anywhere else, even just in the third game. You could argue that the Quarian/Geth conflict foreshadowed these questions, but in my playthrough, the Quarian and Geth got over their old prejudices and started working together to rebuild the Quarian home world. That is in direct contradiction with what this ridiculous hologram kid says, which our character is forced to believe. The ending feels like it was written in seclusion from the rest of the series and then crammed in with it at the last minute, and as a consequence lacks the exposition and narrative that would be required throughout the game for it to make sense.

Speaking of making sense, let's talk about the Catalyst's excuse for using the Reapers to wipe out all sapient organic life in the universe. This is supposedly because synthetics would eventually make war with and wipe out organics. The extended cut gives you the option to ask the obvious question of why the Reapers making war is any better than other synthetics doing so. The answer is stupid and illogical, and yet our character is forced to listen to it and stand convinced. The argument is essentially that the Reapers are not consciously making war, they are merely doing what they were built for. An analogy is given: "When fire burns, is it making war?" The answer is no. The person who threw the borking fire bomb is the one making war. Let's see, using that as an analogy, who is making war here? The catalyst. So we spend three games fighting the troops of an unknown enemy, and when we finally reach their commander we have a nice little chat about how it was all for our own good and believe all of it. The EC ending still doesn't make sense with regards to the Reapers' origin and purpose. So now lets talk about the crucible. A magical macguffin supposedly capable of destroying the reapers, somehow, over the course of probably millions of years, without knowledge of the catalyst's nature or existence, with the help of several intergalactic civilizations has been created that will change the programming of the catalyst to allow for one of three completely stupid options that make no sense. Let's take the ending choices one at a time.

The destroy option will not only wipe out the reapers, but will kill both EDI and the geth as well as damaging all electronic equipment. What kind of idiot designed this thing? Surely the other cycles had synthetic races, why would they build a device to kill all synthetics unless they knew about the catalyst's purpose? The catalyst itself said that Shepherd was the first to meet it. Even then, destroying synthetics would make no difference in another 50,000 years. Who would build something like that? To top it all off, you have just painstakingly helped the geth to achieve life if your playthrough was like mine. This option is not the one for my character, nor is it one that would have made sense to setup in the first place.

Controlling the reapers kind of makes sense for my character... Inasmuch as I'd kind of like to take control of the reapers and drive them all into the nearest sun. Let me touch on the (lack of)logic surrounding this for a moment though. Shepherd didn't want to control the reapers regardless of how you play your character. In fact, Javik mentions people like TIM who wanted to control them in his cycle, saying they were indoctrinated like TIM. It is logical to assume that reasoning like this comes from indoctrination. But didn't the catalyst say it thought the crucible and its plans were destroyed? Surely the indoctrinated people who designed this option would have tipped the catalyst off? This option's mere existence doesn't make sense.

Synthesis came close to making sense. The problem is that synthesis forces trans-humanism and physical changes on people who may or may not want them. Maybe I'd be cool with being a cyborg, but I know a lot of people that wouldn't. Synthesis is just as ridiculous a disregard of the rights of the people in the universe as the genocide the reapers were performing. And again, who the barf could possibly come up with this given the limited data of the previous and current cycles?

But the extended cut adds a new option. You can refuse to use the crucible, thus spiting the ridiculous and nonsensical options the original game provided. The problem with that is that it renders the entire trilogy of games totally moot. You are just another cycle. Why even bother to tell a story about this cycle instead of the next one or the one before it? This option makes the rest of the game(s) feel like an empty waste.

These options could make sense given a bit of exposition based on this question: "Where did the crucible come from? Who designed it originally?" In fact, you get to ask holo-kid this very question in the extended cut. Do you know what he says? "You do not know them, and there is not time to explain." Of course there is no time to explain, I've already played through the entire game and now you're trying to cram some kind of failed attempt at being deep and philosophical in at the very borking end. And why was the crucible designed to give any random organic that came to the catalysts pad the choice? Answers to these questions along with a bit of exposition and foreshadowing could have sold these options, but there was none.

What's worse is that not only does the ending fail to make sense, it fails to ask any questions or really say anything. It doesn't help us learn about ourselves or our world, and it doesn't make us think about anything. There is no lesson, no allegory, no catharsis, and no elation.

None of the options make sense or are attractive, there is no way to come out alive no matter what, we are forced to sit back and eat up all the blathering of some insane AI bent on destroying sapient organic life, there is no artistic substance, and some would expect me to abide ending? No, I do not approve, appreciate, nor enjoy the new or old ending. I will admit that some things are better in the new however. The relays no longer explode, the crew of the normandy repair and leave planet eden, the normandy crew, including the ones charging the conduit with you have an excuse to suddenly be travelling through the relay system, you get an inkling about what happens after you make your choice, and you get a chance to ask the catalyst a few clarification questions(only half of which will really be answered reasonably.) All in all, it is much better than the original ending. I can say that more people will be able to play it without ruining the series for themselves than previously. I am not one of them.

My first thought was that I should go easy on the writers. I mean, maybe they panicked and couldn't come up with anything better. Maybe they were making things up as they went along and ended up going somewhere stupid. Perhaps it was a sensible problem anyone could have had. But then I learned that there was a different ending, one that was written and discarded. If you read up on that, you'll see that in drawing on the happenings of ME2 the ending would not only have made ME2 more relevant, but would also have made the ending of ME3 more relevant. I no longer see any reason to hold back. Here is the basis for a perfectly good ending, bringing together the plots of previous games in an epic conclusion of choice that pits pragmatism against idealism in an ultimate battle on par with the genophage issue, and it was rejected. The ending for Mass Effect 3, Extended Cut or otherwise, is bad on many levels and has no reason to be so.