It seems like I have this internal clock that every few months says "Hey! That HUD could totally be better designed!" I then proceed to completely rewrite the code for it and move everything around. That happened again, but this time I found that I had anticipated this earlier and redesigned the HUD code to be more accommodative to change in the future.

Also, accommodative should totally be a word. 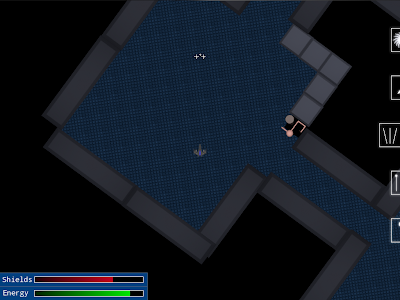 The new HUD is not only less of an eyesore, but more effective. Both important meters are in the same general place, and are also two distinctive colors. This is important because during fast paced action you can't always stop to read the labels or think about which one is which. I also removed the glow, as it really didn't look that great and just made the meters slightly harder to read.

The other thing I did was setup actual effects for enemies when they were effected by an EMP blast. They turn dark red and become... disoriented. The cool thing about it is that I have things setup so that each enemy can be effected differently. Stronger enemies can be more resistant, bosses can be completely uneffected, and some enemies may completely flip out for example.

Aside from these visible changes, I've also fixed several stability issues and spent some time tweaking the damage of weapons and hp of enemies. After spending so much time fighting shredders, fighting enemies like drones and fighters really brought out the fact that there really is a huge gap between how smart they are. Shredders aren't just more tough and powerful, they are much more clever, making them harder to fight on multiple levels. The result is that I've been working on balancing the raw strength of each enemy against it's intelligence. I'll also design levels so that dumber enemies will be more likely to appear in giant groups and spam you with bullets while more intelligent enemies will appear a few at a time and attempt to cunningly blow you face off.

So yea, this session saw lots of little tweaks that came together to make the game feel way better. I've already started work on creating the next enemy, but it's too early on to show anything for it. In the mean time, the extra polish is really helping the game.