After gabbing on about the story for an entire article, it's time to talk gameplay. The action gameplay specifically, as I'm saving the RPG like systems and other stuff for later articles. 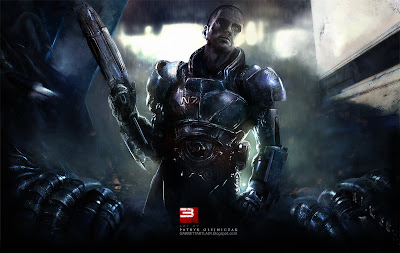 I hate to take the rest of this article to tear apart the gameplay, but the game really asked for it. Those of you who read my dive in Mass Effect 3 article know that the gameplay and story don't flow together nearly as well as in the previous games, and that the story eventually falls on its face. So any gamer will need the gameplay to do a crunk of a good job if it wants to keep the game from falling into the chasm of awful sequels. Sadly, it doesn't.

Let me start off(four paragraphs into the article) by saying that outside of cover, the combat is actually pretty fun. It's a good mix of mid-range circle strafing, close up melee brawls, and long distance sniping. The ability to tap the spacebar to do a diving roll forward or to the side effectively creates a nifty little dash mechanic which gives a skilled player the ability to rapidly change between these ranges at will. Too bad you aren't supposed to play the game that way. Or are you? 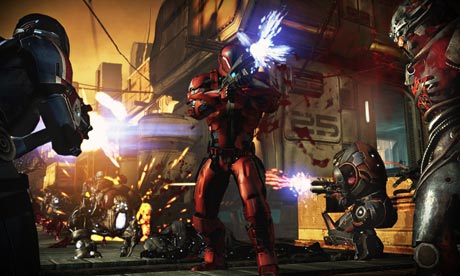 The game seems to discourage cover based tactics on many fronts. There are two enemies which become fairly common about halfway through which make cover practically useless to you if they show up. One of them needs a good circle strafer to die, and the other one needs a sniper. At one point, I found myself leading a huge group of these beasties in circles outdoors in a giant killing pit, carelessly spewing volleys of bullets into their collective mass of enemy. But then, you have long grey corridors filled with chest high walls and enemies that kill you in three seconds if one of your nose-hairs sticks out of cover. So this game can't decide if it's about cover shooting or frantic dodging, and does a mediocre job at both.

You take cover by going up to certain special objects from certain special angles when the game is in a certain special mood and pressing the "take cover" button, and then if you're lucky, shepherd will comply. Leaving cover the right way is also a gamble, as you often can't be 100% sure if the game is going to have your shepherd somersault into new cover which you sometimes see/notice and other times don't, or just get out of the cover they're in. And that's when the game listens to you telling it that you want out of cover at all. It's like cover systems haven't evolved and become less broken hardly at all in the years they've been around. Maybe pop-up shooter fans need broken cover systems to get them up(yes, I mean that in a sick way, you sick pop-up shooter fans).

Before I wrap this up, I'd like to make a suggestion and complaint. Defence missions where you stand in one place playing whack-a-mole with a long onslaught of samey enemies gets boring after the hundredth time. I seem to recall very few defence missions like this in the first two games, so why so many more in the third? Something like half of the game is this same mission over and over again except in differently coloured levels with differently coloured enemies every once in awhile. Did the fans ask for this or something? I know you're obligated to have a mission or two like this, and that's fine. Every once in awhile it can break up the monotony of stealth, assault, escort, and political missions, but in this game there are way too many, and they aren't that great either. If I wanted to play defence missions, there are plenty of games dedicated to or including this type of thing that do a better job. It's fine to mix other games and genre's in to toy with the central mechanics of your game, but you have to make sure you're not just doing a reproachable job on something people can get in better form from elsewhere.

All in all, the central action gameplay system is functional. It's a little shoddy, suffers from a lack of good level design, and feels too repetitious, but it gets you through the story without too many grievances. However, the game fails to patch over this mediocre gameplay with an amazing and well blending story, so it sticks out and is genuinely less fun than the previous games and less fun than a lot of other games on the market.