Infiltrator moves on still. Changes pile up like pancakes on my plate at an all you can eat buffet, so I better write this out before I change something else.

Let's start with the weapons. 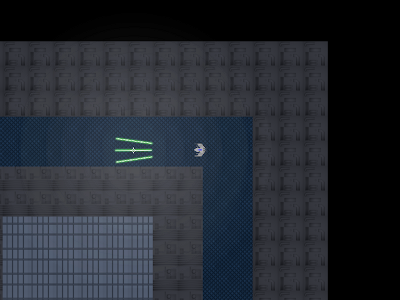 I took a lot of this sessions time developing five weapons. Purple maser pulses, dual gatling guns, the laser shotgun, EMP missiles, and the AIFSA are all setup. This not only includes art work, but also complete programming.

You'll also notice from the screenshot that I'm still adding level tiles. You're probably asking if I plan on building the levels this way. The answer is that if building the levels this way won't disturb the flow, aesthetic, and natural feeling, and if they aren't obvious and blunt, yes I probably will. It's merely one of my options however, and I have yet to make a choice. 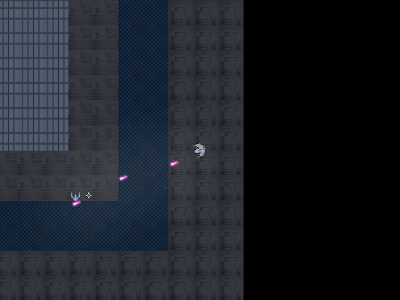 Just like the player's weapons, I've also created art for all five enemies. Bosses are yet to come up, I'm planning on building them on top of the enemy base class. I'm not showing spoilers, including higher level enemies, bosses, and critical level sections, but I don't have much of that to show right now anyway.

The enemy base class is still very much a work in progress. as well as the "Drone" enemy you see in the screenshot. Obviously some programming basics are in place, but there is still a lot of work to be done.