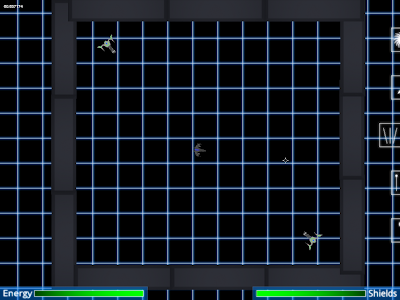 The next version of Infiltrator is currently under testing and development. I'm roughing out the base AI code for the shredder enemies but that will take awhile. To pass the time, I'll explain the game design and provide many actual details. I do have a design document of sorts, but it's spread out over several text documents, concept pictures, scribbling on the backs of napkins, and prototypes. While I'm making no attempt to be all formal and complete in terms of this post being the new design document, it will likely be a lot more organized than any of my other notes.

So let's start off with the central thesis. What is the driving idea behind this game? Infiltrator is a game about skilled dog fighting and bullet dodging. The player's movement speed will be appreciably higher than normal relative to the enemies and bullets, allowing a skilled player to avoid virtually all damage. That is a huge reason that the game will be in top view 2D, with full and tight control over exactly where the ship is going, although it will have some inertia.

Since a big part of this game is about avoiding damage, there will be no recharging health. Slightly higher punishment for taking damage makes sense in this case. The shields(health) can only be replenished by collecting powerups. There will be no extra lives either.

The player will have five distinct weapons with different applications in different situations. This will allow a skilled player to know when to conserve which weapon's ammo and choose the best weapon for a given situation. The weapons will have different DPS(damage per second) of course, but ammo will force the player to be smart about when they fire what weapon. Ammo can only be replenished by picking up powerups, except at the start of the level where each weapon's ammo will be boosted to a certain level if it isn't already at or above it.

Note that the following values are only current and thus represent 'workable' demo numbers which may change in the future. The first weapon is a rapid fire purple pulse weapon that alternates firing between left and right with a rate around 7 shots per second. Total DPS works out to 33.3. The next weapon is a dual set of gatling guns that fire 12.5 times a second and have a DPS of 37.5. Next up we have the laser spread, unofficially titled the "laser shotgun" by my testing team. It fires a deadly spread of three green lasers that do 10 damage apiece. It has a massive DPS rating of 60. The EMP(which is currently under development) fires missiles which do only a bit of damage on impact(15,) but have a formidable blast radius which deals additional damage to and "disorients" all enemies in range. It is meant to be used in a single shot manner, and thus can only be fired once a second. Disorientation will be explained later. The fifth and final weapon, the saw swarmer, rapidly fires small circle saws that home in on enemies and deal 7 points of damage on impact. Firing rate is yet to be decided.

Well, it has become increasingly obvious that this is going to be a multi-post affair. When I need to pass the time of part of an Infiltrator session or I need some extra time to write up a game design article, I'll do one of these. That way you guys can keep getting interesting content even when there isn't a whole lot happening behind the scenes. ;)

--LazerBlade
Posted by Unknown at 3:32 PM