And so, we meet again. There are a lot of changes this time around, so lets just jump right in. 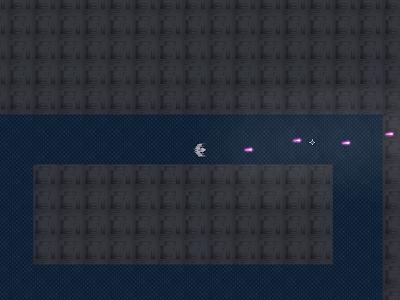 Observing that screenshot, you can probably notice several improvements right off. Firstly, I created some preliminary level tiles to use in building experimental levels. I think that by-hand pixel art looks good mixed with pre-rendered 3d. It creates a unique aesthetic, and goes with the style of the game quite well.

You'll notice the player has swapped out it's missiles for some masers in the style of some of my unfinished novels. There are four maser colors, but I have five different weapons planned, only one of which will be masers. You'll also note that they're going the right direction. Turns out the bug that's been plaguing me for almost a month came from my local translation function. I swapped "Lazer's theorem" out for some gold old fashioned trig functions, and it works like a charm.

Now the white glow you see around the masers is not part of the maser sprite, and it's not part of some internal lighting thing. It's a quick but spiffy idea I came up with. I created a few different sizes, colors, and shapes of glow, which work nicely to fake lighting.

The level you see behind the player was loaded from a level file as apposed to being hard-coded. Level files can contain any number of variables, with two types. The types are string and integer. So I simply create a class to retrieve such variables. This easily affords my game with the ability to load a different background, with invisible enclosing walls of specific size, from a level file. As time goes on, the content read from these files will expand until entire levels can be read.

Besides the changes to the game, I have also made some improvements to my development pipeline. 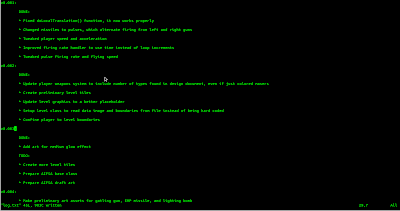 This is part of my "backlog" if you will. It's more of a version oriented TODO list. As you can see, the game is in version 0.003 at the moment. I have a long way to go before I finish, but things seem to be going well.

--LazerBlade
Posted by Unknown at 2:39 PM